What are some of the most notable office landlords, like Boston Properties, doing to address the growth of the co-working segment that is being championed by WeWork? 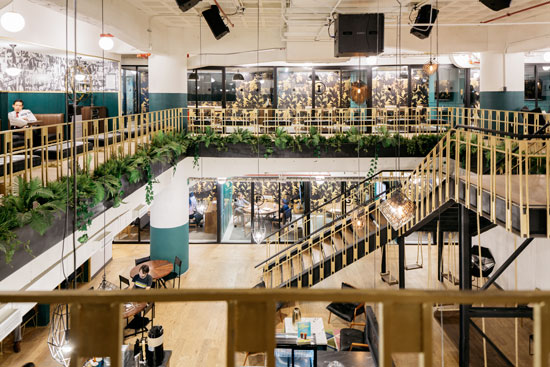 “Our point of view is we’re pretty maniacally focused on our customer, and our sweet spot has been this long and strong customer: long-term leases, strong credit,” [Boston Properties Executive Vice President Bryan Koop] said. “As we continue to focus on that, there will be changes in how we work with them.”

Boston’s surging real estate cycle is driven by tech, both by traditional technology tenants like Rapid7 as well as companies with an increased digital presence like General Electric. With every company increasingly thinking of themselves as a tech company, plug-and-play connectivity and less lag time between lease signing and move-in are rising expectations, forcing landlords to take a more active role in their tenant experience. 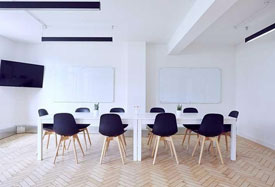 Some tenants now use a model where they lease less space and rely instead on on-demand conference room and meeting space. This model changes the square foot requirements per office worker, and has become a great resource for small to mid-sized office tenants.

These shared office spaces provide “temporary meeting space, conference rooms and event space to companies that would traditionally have leased or rented that space through their landlord. The goal is to offer employers a temporary solution on a need-by-need basis, giving office occupiers more flexibility to pursue cost-saving initiatives such as shrinking their square footage.”

One of the reasons these third-party space providers are gaining popularity within the industry is because they offer more than mere space — they provide hospitality services and create an experience that users would not otherwise get.

Breather, a client of Boston Realty Advisors is looking to grow their Boston presence. Breather is the leading provider of beautiful, on-demand workspaces, with an expanding network of 200+ conference and meeting rooms, across 10 global markets.
Breather’s flexible-term leases ensure the quality, security, and maintenance of each space while providing landlords with an attractive amenity offering for tenants. 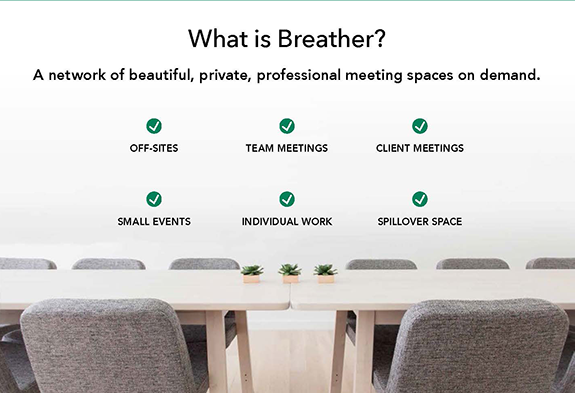 Through the use of its mobile app and proprietary booking technology, Breather enables approved members to reserve and access its spaces on a short-term basis for meetings and flexible office space.

Check out the Breather Boston pfd for additional information. 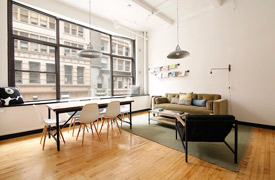 Breather is on an aggressive growth mode with a closing on a $40 million dollar round led by Menlo Venture in participation with Valar Ventures, RRE Ventures, Slow Ventures and Real Ventures. The team of Justin Harlow, Bonny Doorakian, Robert LeClair and Wil Catlin is handling their Boston expansion.

“Breather has tapped into a real need in the workplace. There hasn’t been a company of its kind offering spaces on-demand,” said Venky Ganesan, Managing Director of Menlo Ventures. “Breather has a tremendous vision to connect the world’s spaces and make them accessible to all.”

Breather has no membership fees or long-term contracts. Instead, the company offers workspaces on a pay-per-use basis through the company’s proprietary app.

Staples will be offering far more than office supplies; they’re now also providing office space.  Yes, the new rollout will allow you to have office space where you buy supplies.

The real question: do I want my clients to visit me at Staples?

According to a press release, Staples will be opening up communal workspaces at three locations in the Greater Boston area. 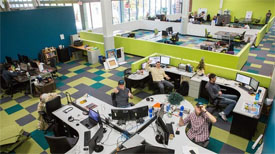 Tech industry insiders are trying to find better ways to connect with you.  What do you care about when you consider starting something new:

At a Monday meeting in Boston of the governing board of MassTech Collaborative’s Innovation Institute, industry leaders talked about what’s working with the state’s vast programs and services for entrepreneurs, what could be done better, and how significant the services are to the broader economy.

The MassTech Collaborative’s 2015 “Innovation Index” found that there are about 33 co-working spaces, 25 makerspaces, 26 incubator programs and 15 accelerator programs in Massachusetts. 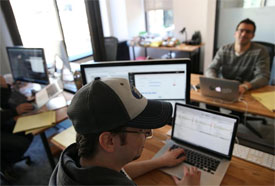 WeWork continues its global expansion with adding 31 St. James Avenue in Boston’s Back Bay to its location roster.

The Park Square Building, 31 St. James Avenue, is a 445,464 square foot building 11 stories tall with 40,524 square foot floors according to CoStar. The building was built in 1922 and is owned by Capital Properties.

Where is Park Square in Boston? Here’s Wikipedia’s overview:

Park Square in downtown Boston, Massachusetts is bounded by Stuart, Charles Street South, Boylston, and Arlington Streets. It is the home of the Boston Four Seasons Hotel, the Boston Park Plaza Hotel & Towers, and nearly a dozen restaurants. To the north across Boylston Street is the Boston Public Garden. To the east is the Washington Street Theatre District. The Bay Village neighborhood is to the south, and Back Bay is to the west.

At one time, the terminus of the Boston and Providence Railroad was located in the square, however after South Station opened, the terminal was closed.

A small street in the district was renamed “Park Plaice” in honor of Legal Sea Foods, a restaurant located there. 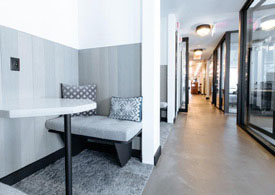 What would it be like to leave your office and work at WeWork?

WeWork is an American company which provides shared workspace, community, and services for entrepreneurs, freelancers, startups and small businesses. WeWork designs and builds physical and virtual communities[6] in which entrepreneurs share space and office services and have the opportunity to work together.[7] The company’s 30,000+ members have access to health insurance, an internal social network, social events and workshops, and an annual summer retreat.[8][9][10]

WeWork is one of many companies in the Boston area that offer co-working space for the city’s burgeoning startup scene, including Worklab, Coalition, and the Cambridge Innovation Center. While its membership prices are on the costly end, ranging from $45 a month to more than $450 a month per desk, the price is not a deterrent for entrepreneurs.

For a relatively modest cost, entrepreneurs say they get a ready-made office space complete with a sense of community, an internal social network and the enriching and collaborative startup culture that prospective employees want when they sign on to work for a startup. 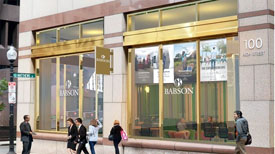 Babson College will be offering a shared co-working drop in center at 100 High Street in the Financial District of Boston.  Kerry Healey, Babson President, comments that nearly half of the 16,000 graduates live or work in greater Boston.

This is the first of its kind where higher education is offering a retail presence rather than just a club experience on an upper floor.

According to the Boston Business Journal, “the Wellesley college known for its success preparing entrepreneurs is leasing 9,000 square feet at 100 High St., including 2,000 square feet of ground floor space fronting on the Federal Street side of the building, in the Financial District. Graduate business students will be able to take classes at the site and alumni will be able to work in a co-working setting…The location, scheduled to open before fall 2016, will more than double Babson’s space in Boston.”

You can read the full article on the BBJ’s local website.

The workforce that rides to work on our public transpiration and roadways if very different today than it was 10 years ago.  Shared workspace environments like WeWork have changed how business’s get up and running and reduced some of the barriers to going out on your own.