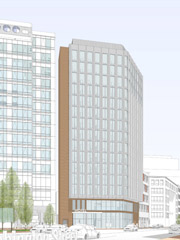 From parking cars to a place to park yourself for a good night’s rest in a 15-story boutique hotel on North Washington Street.

According to an article on the Bizjournals Boston site, “Tom MacKay of LIMAC LLC and consultant Fred Mannix, who has developed the 112-room Hotel Onyx in the Bullfinch Triangle, filed the proposal March 17 with the Boston Redevelopment Authority that calls for a 74-room hotel at 88 North Washington St…The hotel will be developed on the 2,100-square-foot site along with a lobby and cafe.”

You can read the full article on the Boston Bizjournals website.

Lewis Wharf is looking to make a splash in the Boston waterfront with their redevelopment.

Boston-based real estate firm JW Capital Partners has proposed redeveloping and rehabilitating a 225-space parking lot on Lewis Wharf, a waterfront site in the the city’s North End neighborhood…The centerpiece of the proposed development is a 300-room luxury hotel surrounded by 2.4 acres of public outdoor space along the waterfront, along with an updated Harborwalk area. The site would also host the Boston Sailing Center and include a below-grade 380-space parking garage to replace the above-ground parking garage at 28 Atlantic Ave.