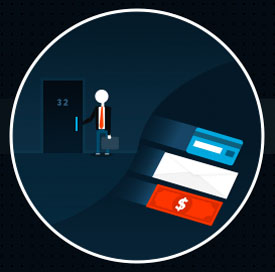 If we’ve heard it once, we’ve heard it a thousand times: A company has outgrown its space and they’re growing. Fast. But, how much space will they need a few years from now is anyone’s best guess. Unfortunately, guessing games won’t cut it. Guess too low and they’re moving again in no time. Guess to high, giving them room to grow, and they won’t be able to afford the rent today.

Countless businesses have sprouted up to solve this challenge. The solutions include incubators and hubs, as well as daily and even hourly rentals, including relative newcomers LiquidSpace and Breather.

There’s another approach that’s picking up steam. Instead of downsizing, a host of new startups have enabled emerging companies to super-size their office space. Companies like PivotDesk and Kinglet, available only in Baltimore for now, help organizations rent out their extra desks, on a month-by- month basis.

While PivotDesk and competitors are still new, the approach isn’t. In fact, in the investing world, it’s an age-old approach known as dividend investing. And fans of this approach aptly refer to it as the “getting paid while you wait” model. Meaning, you buy the stock today and get paid a dividend while the stock slowly grows in value. In the office space analogy, you may only need 2,500 square feet today, but instead, go for 5,000 square feet and rent out the empty desks until you need team.

END_OF_DOCUMENT_TOKEN_TO_BE_REPLACED

Before signing a multi-year office lease, tenants run through a list of questions to ensure the space is “future ready,” meaning it works for their team today, and will still work tomorrow. Will our team fit here in three years? Do we have room to grow? Will our next wave of employees want to work in this part of town? Can they get here easily?

Now, there’s a new question to add: Will it be fast enough?

According to a new research report from Cisco, Internet traffic will increase nearly three-fold within the next five years due to more users and devices, faster Internet speeds, and an increase of video viewing.

Companies of all shapes and sizes, from startups to Fortune 500s, will be part of this Internet evolution. The best companies will be the ones that plan for the future. The report predicts that annual Internet traffic for the year 2018 alone will be greater than all traffic that has been generated globally from 1984 to 2013 combined.

The report also says that by 2018 global broadband speeds will reach 42 Mbps, up from 16 Mbps by the end of 2013; more advanced regions may have average speeds approaching 100 Mbps by 2018. In addition to the increased speed, another major driver of the traffic will be the use of video, particularly high-definition. The report suggests that by 2018, nearly 80 percent of all traffic will be video, with a majority for HD video.

It’s not enough for tenants to see if their team will fit in five years, now they need to determine if their space will meet their increased need for speed too. 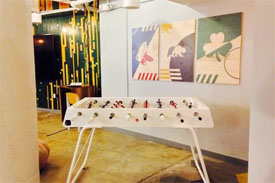 Temporary workspace provider’s continue to grow to address the demand from the entrepreneurial clientele at 745 Atlantic Street. This comes in addition to news that it will also be adding its first Cafe in Boston at the location.

Months after opening a co-working space near Boston’s South Station, WeWork is expanding due to increased demand from startup founders looking to rent workspace in the Boston area. The New York-based boutique office space firm opened its 90,000-square-foot location at 745 Atlantic Ave. near South Station in February and will now add about 600 new desks and 48,000 square feet to that location later this fall. WeWork also has a 50,000-square-foot location in the Seaport District. 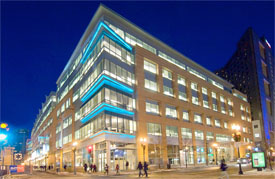 Where are hip technology companies signing new leases?  DTX, Downtown Crossing!  Why?  It is a great value option with T access from Green, Orange, Red and Blue lines.

Instead of expanding in Kendall Square with the Googles and Amazons of the world, Sonos recently signed a lease to move into 170,000 square feet in Lafayette City Center, a downtown Boston office complex that long served as back-office space for State Street Corp.

“Once we saw Lafayette, it was clear to me that it was the best place for us,” said Andrew Schulert, vice president of quality at Sonos, which employs 375 people.

What Schulert saw was a resurgent real estate market in Downtown Crossing, where hip technology companies are joining new retail shops, restaurants, and upscale residential buildings. The interest among tech firms has benefited downtown landlords who are trying to replace dated department stores and other tenants that have left the area. 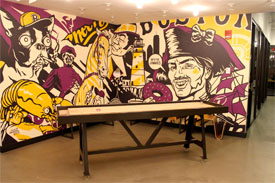 Café owners lookout; a new provider is opening up with its own customer base.  WeWork continues to forge ahead and cater to the customer by offering additional services at street level  The latest venue is a Café’, by no sense is this a new concept, but it is if you are in the temporary office space business.  This fulfills two goals; first more services to its existing customer base.  Second; a street level presence to attract new customers.  Banking has also seen this in Café 360 by Capital One.

Bostinno.StreetWise.co is reporting a “Small scoop here: In the midst of a Boston expansion, WeWork has also taken street-level retail space in the Hub. The company plans to open a coffee shop at 745 Atlantic Ave., a few floors below its shared workspace in the same building…This sets up a potential barista duel for the hearts and minds of downtown Boston’s startup set. Cambridge Innovation Center, another shared workspace, is also developing a café project on the ground floor of its 60,000-square-foot Boston facility at 50 Milk Street. CIC’s founder and chief executive, Tim Rowe, demurred about a date for its opening.”

The full article details WeWork’s cafe project as well as how it fits in with its larger corporate strategy. You can read it on Bostinno.Streetwise. 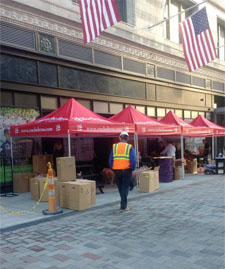 The newest tenant to downtown crossing has opened, kinda, even though their space isn’t ready yet.  Looking for fresh fruit an vegetables, stop by daily from 10 AM to 6 PM!

Roche Bros. to set up a farmers’ market outside of its coming Downtown Crossing location to introduce itself to the neighborhood until the store officially opens in early Spring, 2015.

According to a news release today, printed in the BBJ, “the grocer is setting up five fresh produce stands outside the historic Millennium Tower/Burnham Building where construction is currently underway on the company’s 25,000 square-foot flagship supermarket. The open-air offerings are scheduled to operate seven days a week, from 10 a.m. to 6 p.m. The produce stands will primarily feature fresh fruits, as well as some vegetables, flowers, and seasonal baked goods. The Roche Bros. team will keep the stands open through October.”

You can read the complete statement and related article on the Boston Business Journal’s website. 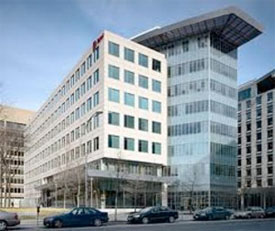 Are you looking to hire web developers are part of your growth into new office space?  If yes prepare for some competition.  Employers are thinking beyond just salary when it comes to new hires some items that hit the list are:

According to the BBJ, “Companies are increasingly trying to make it more attractive for these Web experts to stay at firms. “When these guys are on the market there’s so much demand for them that they’re getting snapped up within a day or two.”

What are you offering and how does it stack up?

When you are thinking about new office space, one thing you don’t have to consider: can your proposed building accommodate the storage demands of your future internet traffic?

Cisco estimates that “video traffic will make up 79 percent of all consumer Internet traffic in 2018.” How are server costs going to adapt to fit this? Cisco’s one to know. 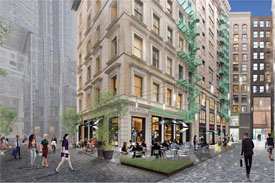 Quaker Lane in Boston?  Must admit, some would have no idea where it is located.  Well, changes are coming.  This road is surrounded by the former Fidelity headquarters that was sold and is located near the intersection of Congress and State Streets.  The proposed plan is to add retail services on the ground for, renovate the offices above and add residential component.

“A Boston real estate firm is proposing to redevelop a drab cluster of office buildings near Faneuil Hall into a more modern commercial complex with restaurants, stores, hotel rooms, and residences.”

“Our plan is to rejuvenate the entire block through a mixed-use redevelopment strategy,” said Stephen Faber, executive vice president of Related Beal. “These buildings and this location present us with the opportunity to . . . create a real destination.” 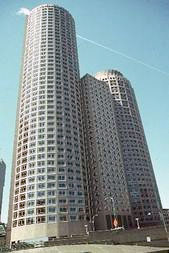 One International Place in Boston

Some of Boston’s largest office towers have experienced strong leasing activity in either attracting new tenants or renewing their existing ones.  Some building highlight are the following commercial spaces:

“A Boston Business Journal analysis of some of the largest towers in the city shows that many are enjoying their highest occupancy rates in years, although the good times haven’t come easy. Financial filings indicate these landlords have been working on overdrive to keep their properties filled, with many having to thread some impressive needles in order to head off or counter major lease expirations before they bite.”

You can view the BBJ’s status update “based on recent loan-servicer filings, on some of the biggest office properties in Boston’s downtown market,” here.