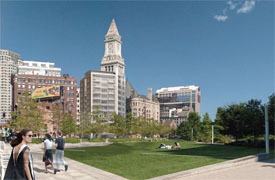 Your favorite parking lot is going the way of residential condo’s on the Greenway.  Parking in the city continues to cost more and there are fewer available options. Back Bay’s monthly rate can range from $350 to $500, while the Financial District can be from $400 to $525.

“City officials have approved a $45 million condo project that will be built on a parking lot overlooking the Rose Kennedy Greenway…The 67,000-square-foot, 12-story building at 55 India St. will contain 44 one- to three-bedroom condos and 4,000 square feet of commercial space. The site consists of three parcels, two of which are privately owned and one acquired from the Massachusetts Department of Transportation.” 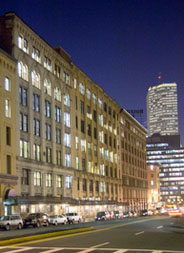 For a 400 year old city, we are experiencing record growth with billions being invested into new office, residential, and retail projects in areas of the city that were previously left for dirt lots or industrial space.

Bisnow.com, offers some historical perspective on the alternation and modernization of the hub over just the past decade:

“A decade ago, the waterfront—just across Fort Point Channel from the downtown Financial District—was still seen as the home of a languishing commercial port. Now the Seaport, aka the Innovation District, has new infrastructure, new buildings like Hanover’s (above), and a flock of cranes bringing more product online. Skanska is building a new HQ for PwC; State Street recently completed its relo into Channel Center; The Drew Co is quickly leasing apartments at Waterside Place; and The Fallon Co is selling super luxury condos on Fan Pier. The Seaport has come alive, Douglass says, with spectacular views and a condo market that’s heating up.” 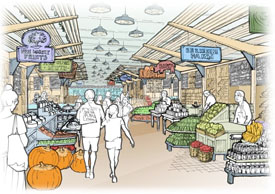 This will be a great addition to community and Greenway.  Looking forward to visiting when it goes live; the concept reminds me of the Ferry Plaza Farmers Market in San Francisco.

“Plans for the year-round market along the Rose Fitzgerald Kennedy Greenway were approved Thursday night by the Boston Redevelopment Authority. The project, expected to cost $14 million, will include up to 45 vendors as well as a bakery, seafood raw bar, and demonstration kitchen staffed by local chefs….’For people who live close to the market looking for fresh produce, this is going to be a godsend,’ said Liz Morningstar, executive director of the nonprofit Boston Public Food Market, which will develop and manage the facility.”