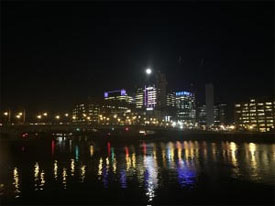 How bright is too bright for Boston’s Seaport?  It appears that what has been proposed in the design phase is significantly dimmer than post construction and the regulators are rethinking approvals going forward.

The Vertex Pharmaceuticals headquarters’ “eye-catching arrays have met with mixed reviews in a city that often views changes in the skyline with suspicion.”

“Personally, I loathe the lighting on those buildings,” said Michael Davis, co-chair of the Boston Civic Design Commission. “We like interesting, progressive architecture, but subtlety is important and the new lighting we’re getting on the Fan Pier, no one would call subtle or sophisticated.”

Now, Boston Redevelopment Authority (BRA) officials are asking the developer to tone down the light show.