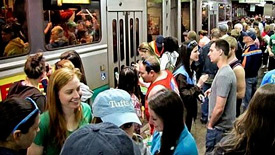 Boston takes another 1st position in the nation, this is not a positive, however, this is The T!

Our beloved MBTA is dead last with the most breakdowns in the U.S. We are an educated Commonwealth, but we really need to get smart about how we expect our workforce to commute without operational issues beyond their control.

According to a recent article on the Boston Business Journal, “the MBTA recorded 219 major mechanical failures on its commuter rail lines in 2014 — four times the national average. (Notably, the data did not include breakdowns last year during the record-setting snowfall in January and February)…Nationally, 24 commuter railroads had an average 52 major failures in 2014.”