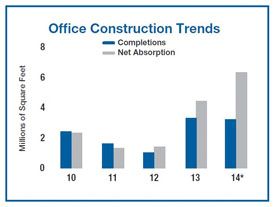 Boston continues to lead the nation with one of the most stable office markets which is due to a strong local economy.

“Over 38,500 jobs were created in 2013 in the city, increasing payrolls 1.5 percent. By the end of 2014 employers will add 40,200 new jobs, of which 14,000 will be office-using positions—a 2 percent increase from last year…Developers completed approximately 4.2 million square feet of office space over the last twelve months as compared to merely 1.4 million square feet in the previous year. Around 5.2 million square feet currently under construction in the metro area is expected to come online throughout 2016.”

“According to Marcus & Millichap, approximately 3.2 million square feet of office space is set for completion by the end of 2014—a 1 percent increase from 2013—with new inventory being heavily concentrated in the Boston/Suffolk County and Route 128 North submarkets.”

You can read the full report on MHN Online.