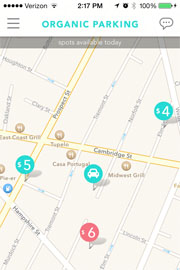 How would you like to Uber a parking space?  App is trying to make it happen.  Not too sure the Massachusetts driver would be willing to wait for the next owner of the space to show up and claim it.  If I don’t have the App and see the person getting into their car and pull up behind them the old fashioned way can I claim it?

The BBJ described the app as follows:

“Developed by former Harvard Graduate School of Design professor Kostas Terzidis, the app lets drivers with a coveted space name their own price for a space. Then a driver, using the app, can claim the space by clicking it on a map and paying for it within the app using a credit card or bitcoin. The driver seeking the space can anonymously message or call the driver who has the space and let them know they’d like it. They can also watch the driver approach the space on a map within the app, much like users of Uber can watch their ride arrive. The person who has the space would wait until the other driver arrives and then the space swap would take place.”