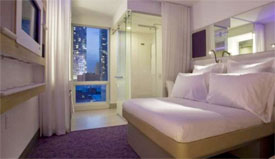 What’s new coming to the Seaport?  Micro rooms.  Yes, soon you will be able to get a hotel room that is about half the standard size.  The location is will be along Seaport Boulevard near the Barking Crab.

From The Boston Globe:

“John B. Hynes III is proposing to develop a Yotel, whose rooms — Yotel calls them “cabins” — have set a new benchmark for efficiency from London to New York to Amsterdam…The rooms in Boston would range between 160 and 200 square feet, Hynes said, or roughly half the sizeof traditional rooms at the nearby Westin Waterfront. The 307-room Yotel is to be built along Seaport Boulevard, across from the John Joseph Moakley US Courthouse.”