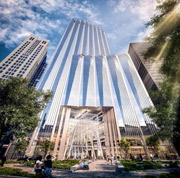 Should the shadows make way for the Winthrop Square tower, or should the law enacted in 1990 and 1992 hold the line? This will have a direct impact on the Boston Common and Boston Public Garden.

Laws enacted in 1990 and 1992 dictate new buildings in that area only can cast shadows over the parks during the first hour after sunrise or before 7 a.m. — whichever is later — or the last hour before sunset.

“Based on this data, we believe the project’s many benefits more than compensate for the shadow cast over the Common and the Public Garden,” Millennium partner Joe Larkin said. “We continue to welcome dialogue with all concerned parties and remain confident that a mutually agreeable resolution of this issue will be achieved.”