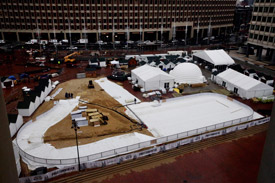 Boston’s City Hall Plaza is in the midst of a transformation into a winter wonderland regardless of temperature.

According to the Boston Globe, “the dreary landscape will [soon] turn into something unrecognizable — a winter wonderland, with a giant ice skating loop, ‘chalets’ selling ornaments, chocolate fountains, and copious holiday decorations…’Boston Winter,’ which debuts Friday, seems like a smaller version of New York’s impressive Bryant Park. Though less ambitious than originally planned — the restaurant and ‘iconic observation wheel’ proposals envisioned for next spring were scrapped due to logistics and finances — the site is the realization of Mayor Martin J. Walsh’s vision to reinvent the plaza.”

The full article is available on the Globe, here.