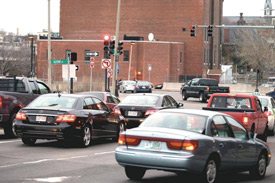 Mayor Walsh is planning an update to the city’s master plan, which was last updated in the 1950’s. The concern is how do manage the growth of the daytime and nighttime population while maintaining efficient access for commuters and tourists.

Boston’s building boom will need to stretch into some of the farthest reaches of the city to keep pace with a population that could hit 800,000 by 2050, according to a new citywide master plan the Walsh administration previewed Thursday.

A draft of the plan, called Imagine Boston 2030 envisions new neighborhoods emerging from underdeveloped pockets of a city that is bursting at the seams in more central locations. Walsh officials said they will use the master plan to sustain and redirect growth more evenly around the city, and to attack seemingly-intractable challenges, from pricey housing, to traffic-choked streets, to rising sea levels.

One key element of the 300-page document is “expanding neighborhoods,” in which a half-dozen pockets, mostly on the outer edges of the city, would be targeted for large-scale mixed-use development. Many of these locations already have good access to public transit, city officials point out, and have lower land costs to allow for more moderately-priced housing. That would help relieve pressure on more popular neighborhoods where prices have soared.