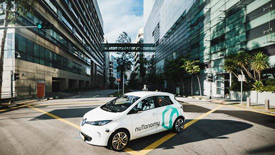 Self-driving cars are going to change our relationship with the automobile far more significantly that any other change that has been introduced over the century. The days are numbered until we simply “Uber” our own car to come pick us up after work. Some car manufactures are building their own technology to compete directly with ridesharing companies.

“Boston and Massachusetts are leaders in rethinking the future of transportation, and we are grateful for their partnership and support of nuTonomy’s efforts to develop a fleet of self-driving cars to serve the public,” said CEO Karl Iagnemma in a statement.

The pilot program will be the first test of autonomous vehicles on public streets in Boston, and comes just a month after Mayor Marty Walsh and Gov. Charlie Baker signed executive orders allowing tests of the vehicles as long as they pass state inspections and have a person in the driver’s seat ready to take control if anything goes wrong. The nuTonomy test is part of the the Go Boston 2030 plan to rethink city transportation over the next decade and a half.