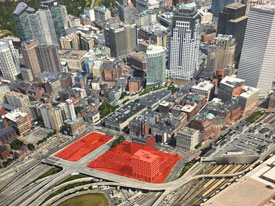 Just because state-owned land near South Station is for sale, it doesn’t mean it will sell. The location is ideal, but the encumbrances make it far less attractive for any suitable bidder.

“It’s just a particularly complex site by virtue of its location and logistics. And it has a utility plant that needs to be incorporated into your development scheme,” [Curtis Kemeny, a veteran Boston developer who considered buying the site the last time the state tried to sell it, in the mid-2000s] said. “It’s especially complicated.”

The Baker administration used the site — which it dubbed SouthGate — last year to highlight its campaign to sell state-owned parcels to developers, unlocking new sites for housing in crowded Greater Boston and bolstering state coffers with the proceeds.