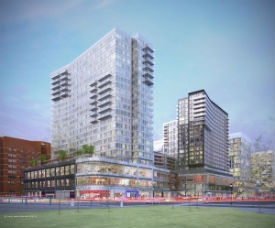 Movies, bowling and fitness are on their way to the Seaport.  The Seaport transformation continues to evolve as more neighborhoods amenities are added, along with the designation of Seaport Square.

“Seaport Square master developer Boston Global Investors and Morgan Stanley acquired the 23-acre parcels, most covered with surface parking, from News Corp. in 2006. The full buildout would contain enough space to fill more than five Prudential Towers…The next phase will be a 450,000-square-foot office building on the parcel directly east of One Seaport Square. The site is currently occupied by Our Lady of Good Voyage chapel, which will be relocated to 51 Seaport Boulevard. Hynes said the office building could be built on speculation beginning in 2016.”