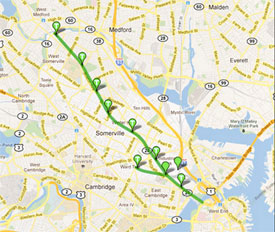 The city of Boston is growing its daytime and nighttime population and with that comes infrastructure, who steps in?  The T.  Well yes, it has been discussed for years, but the Greenline is adding six stops in Cambridge, Somerville and Medford.  While some might argue that the Greenline is slow and clunky, yes it’s the old subway in the country, is still performs.  By adding these stops commuters will gain affordable timely access to the city.

Bostinno.Streetwise notes the MBTA’s Green Line Extension project or GLX, calls for “a total of six new Green Line stops added in Cambridge, Somerville and Medford, as well as the relocation of the existing Lechmere Station. One of those planned stops is Union Square – a location which is due to receive its own billion dollar makeover.”

For more info on the GLX, jump over to Bostinno.Streetwise.