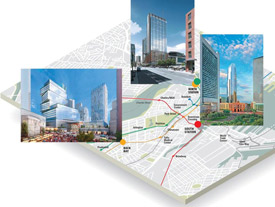 Train and towers will be the combination for three large-scale projects at prime Boston locations, including South Station, Back Bay Station and North Station.

Brief excerpts on each impending Boston train station development from the Boston Globe:

North Station
Boston Properties and Delaware North have already begun construction at North Station. That project will eventually include a 38-story residential tower, two shorter buildings, and a massive retail complex at the long-empty site of the old Boston Garden on Causeway Street.

Back Bay Station
Across town, Boston Properties recently unveiled an ambitious vision to remake Back Bay Station and a neighboring parking garage as the base of a trio of buildings that would join the Back Bay and the South End.

South Station
And at South Station, the Houston developer Hines is attempting to kickstart long-stalled plans to build what would be among the tallest buildings in the city.

According to the Boston Globe article, “all three projects are complex, in terms of engineering and economics. But for the cash-strapped Massachusetts Bay Transportation Authority, they bring deep-pocketed partners who could help pay for needed transit improvements…In return, the developers would get access to some of the best locations in a crowded city with a growing population, where getting around can be a challenge.”