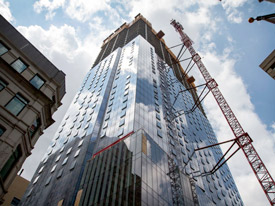 The skyline of Boston’s downtown crossing have never seen so much change as we are witnessing now.  This location simply makes sense for concentrated development due to direct access to the Red, Green, Orange and Blue lines combined with its walking distance to the core of the Financial District and Back Bay.

According to Curbed Boston, there are fewer areas of Boston seeing more large-scale development than relatively tiny Downtown Crossing. Spires such as the almost-done Millennium Tower and the proposed One Bromfield (and the nearby Winthrop Square Garage redevelopment) could finally pivot the neighborhood away from its 9-to-5 feel and toward a more 24-7, work-live environment.