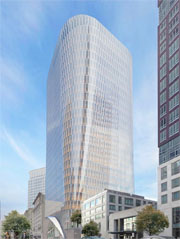 The John Hancock tower Version 2.0 is being planned for 380 Stuart Street in Back Bay.

An article on the BBJ outlines the “six things you need to know about the tower proposal;” here are a few excerpts from the Boston Business Journal’s report: