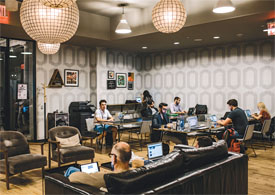 Is WeWork onto something here or will this be a passing fad?  Time will tell, but if the 90,000 glasses served last month are a litmus test of the future, WeWork is onto something that could transform how “Justin in time” office space is used.

At a basic level, WeWork is a company that sublets office space, taking care of many of the time-consuming hassles involved in self-employment. That’s not the factor, though, that has captured the fancy of venture capital investors, who have pushed the five-year-old company’s valuation to a giddy $5 billion…WeWork has cast itself as a new kind of workplace for the post-recession labor force and a generation that has never known a cubicle. It aspires to make your job a place you never want to quit.