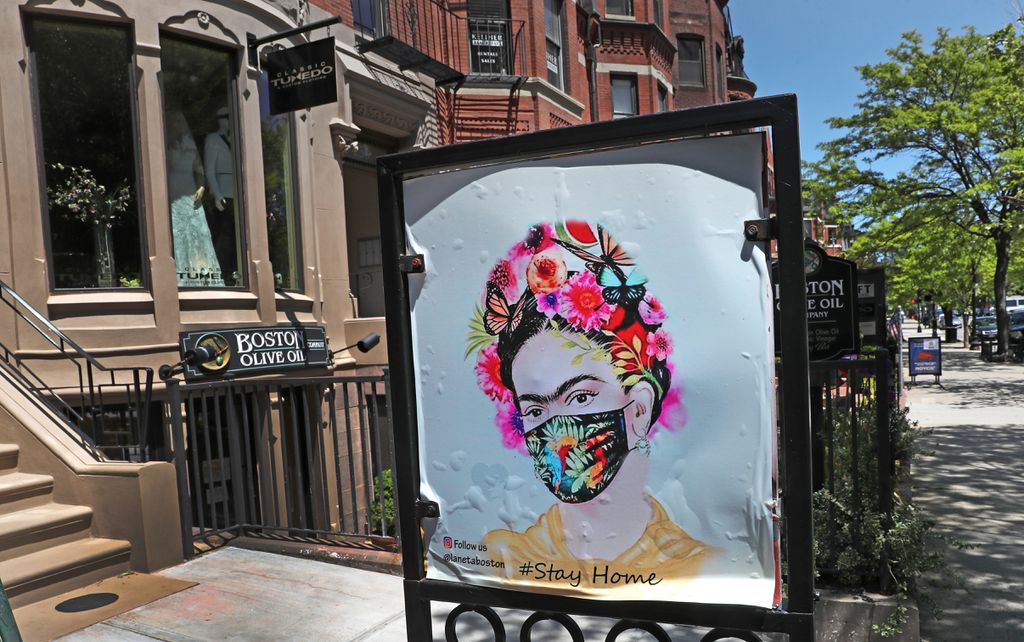 It says a lot that the busiest spot on Newbury Street on a gorgeous Tuesday was the decidedly unglamorous UPS Store, where people spent their lunchtime lined up outside to mail packages.

In normal times, this stretch of the Back Bay would have been jammed with pedestrians who had come to shop, eat, and people-watch. Parking would have been harder to find than toilet paper at a Walmart in April. It would have been the perfect day to play hooky after lunching outside on the patio of Stephanie’s.

Instead, like during the previous 10 or so weeks, Newbury Street was eerily quiet. The Massachusetts economy may have tentatively reopened, but you couldn’t tell by walking down this quintessential street of Boston commerce. Between the papered-up windows and “for lease” signs, it was hard to find a store or a restaurant that was open for curbside or takeout service.

Consider the end closest to the Public Garden, where the poshest shops are located. Burberry was open for curbside pickup, but Chanel next door was not. Both Salon Capri and Mario Russo Salon welcomed back clients, but not the Italian boutique Brunello Cucinelli in the storefront below them.

In this coronavirus spring, a stroll down Newbury Street felt neither leisurely nor luxurious. Instead, it was one more reminder of the economic toll of the virus, which forced the shutdown of so-called nonessential businesses for two months.

Some stores felt frozen in time, their windows plastered with March postings about being temporarily closed. Other shops flashed signs of life — like the handwritten note on Anthropologie’s front door that read: “Hi UPS + USPS we are back in store every day 10 am-2 pm!”

But it is the papered-up storefronts that really give you pause: How many of these stores will be part of the state’s economic restart?

Dan Dumenigo, owner of the Barbershop Lounge, wondered the same as he opened his shop on Monday for the first time since March 24. People are long overdue for a haircut ― you’ve seen them on Zoom ― and by Tuesday morning Dumenigo had only two appointments left for the rest of the week. While his barbershop is busy, he couldn’t say the same about an empty Newbury Street on a picture-perfect day.

He’s especially worried about his stretch of Newbury, between Fairfield and Gloucester streets, which benefits from being a block away from the Prudential Center. How many of those people working from home will come back to the office tower? Not so long ago, thousands of workers used to spill out on to Boylston and Newbury during lunch time. They grabbed a bite to eat, did a little shopping, and maybe even got a haircut. Together, they spent a lot of money.

With the prospect of more people shifting permanently to working from home, Dumenigo said, some retail business tenants wonder if they can get by with fewer customers.

Even before the pandemic, the future of Newbury Street as a retail and restaurant destination was in doubt. As the mom-and-pop businesses that gave it character were being forced out by rising rents in recent years, national and international chains have taken over. Restaurateurs with the biggest buzz passed over old-style brownstone dining to open up in the shiny neighborhoods of Fenway and the Seaport. Now, some of the most vulnerable shop owners along Newbury worry that the coronavirus fallout might be the “final straw,” said Dumenigo.

Vacancy rates have hovered around 10 percent to 15 percent on Newbury, which is higher than Beacon Hill’s Charles Street or Harvard Square, according to Whitney Gallivan, partner and managing director, of Boston Realty Advisors, a brokerage advisory firm.

But Gallivan isn’t ready to write off the neighborhood. As the virus makes us reimagine everything, including shopping, she believes Newbury will remain relevant.

“Newbury has always been a fixture in the city’s retail shopping . . . there is nothing else like it,” she said. “Newbury will be on the list of places people will want to shop.”

But Gallivan and others point out that its survival will, in part, depend on the strength of the relationship between tenants and landlords. They need to work together because the economic recovery will be slow, with revenue kept down by limits of the number of shoppers and diners allowed inside stores and restaurants. Covering the rent is going to be a huge challenge. Compromises will need to be reached, and soon.

As longtime Newbury Street tenant Patrick Lyons puts it: “What COVID is going to do is lay bare the reality of stupid leases.”

Lyons, whose Sonsie restaurant has been on Newbury for close to three decades, credits his longevity to a landlord who isn’t out looking to lease to the highest bidder.

“We have an enlightened landlord who understands the magic of Newbury Street,” he said.

The City of Boston can enhance that magic by closing streets to auto traffic and encouraging outdoor dining, something it’s considering for neighborhoods across Boston. Since 2016, Mayor Marty Walsh has promoted a few car-free weekends a year on Newbury, drawing crowds and rave reviews.

How about expanding that to weeknights? Then leave it up to the ingenuity of business owners to add bells and whistles like strolling musicians and dancing under the stars.

Some days it’s hard to imagine how we can ever return to our pre-pandemic lives. But Meg Mainzer-Cohen, president of the Back Bay Association, reminded me we’ve been here before.

“I remember sitting in my office overlooking Boylston Street – completely empty after the Boston Marathon bombing . . . will this ever turn back to normal again?”

We know the answer. We eventually emerged from the horror of that day. Just as we will one day walk down Newbury Street again, no longer weighed down by the pandemic.