This plan to remake the Government Center Garage is genius. The notion that the garage will be repurposed into a smaller garage, apartments and tower infrastructure solves many problems that held this project back. The largest non-economic benefit for the neighborhood is not having to go through demolition and then site work that could exceed 18th months. 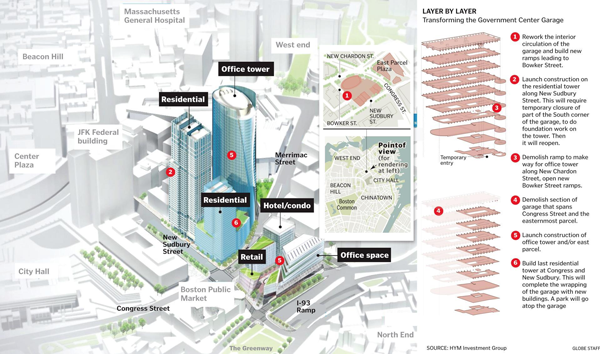 “It’s not as if you can just swing a wrecking ball at this thing,” said Tom O’Brien, managing director of the development firm HYM Investment Group, which is turning the huge garage into the base of two new skyscrapers, a third mid-rise apartment building, and a plaza of low-rise buildings along the Rose Kennedy Greenway.

Instead, HYM will carefully take down parts of the garage, while remaking other sections so it can continue to provide parking during and after construction. In some places whole sections of the garage will be demolished, while elsewhere HYM will slice off portions to make way for several of the buildings; the remainder of the garage will serve as a platform that unifies the complex.