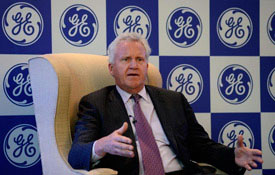 “We Bring Good Things to Life” was an advertising slogan used by General Electric between 1979 and 2003.[1] It was designed by the advertising firm BBDO led by project manager Richard Costello, who would later go on to become head of advertising at General Electric. The slogan was designed to highlight the diversity of the products and services the company offered. The slogan, after its many appearances in GE advertising, was responsible for increased popularity and a new image for the company.

Will GE claim Boston’s Seaport as their new corporate home? A recent article on the Boston Globe notes, “Boston and state officials have been talking frequently with each other and with General Electric Co. about relocating its global headquarters to the Seaport District, according to people familiar with the matter.”