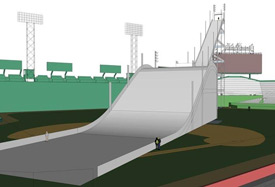 Fenway Park is far more than just home to the Red Sox. It has evolved to a park that hosts many event from concerts to hockey, and now, a Big Air Jump.

According to Bisnow, “Fenway Park’s Big Air Jump is being assembled (all 26,000 pieces) for its big day on Feb. 11 and 12. And when the estimated 25,000 people stream in, the jump will be even taller than the originally announced figure, according to BostInno. The structure reaches 150 feet high and 338 feet long.”

You can read more about Fenway’s Big Air Jump on Bisnow.