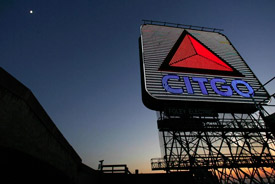 The rights of the iconic sign in Kenmore Square are being discussed that might protect it in perpetuity. Some are opposed, citing restrictiveness on future development while others want to preserve Boston’s history.

A draft report being drawn up by the Boston Landmarks Commission would restrict any new owner’s ability to make drastic changes to the shape or views of the iconic [Citgo] sign, which sits above a building that Boston University is selling to development firm Related Beal.

Commission members put together a list of “character-defining features” they would protect through a landmark designation, everything from its 60-foot-by-60-foot dimensions to its famous red triangle and the pattern of its lighting…Also on the list: “unobstructed visibility” from Fenway Park, the Massachusetts Turnpike, Memorial Drive, and elsewhere, which probably would prevent Related from building anything next door that would be taller than the sign.