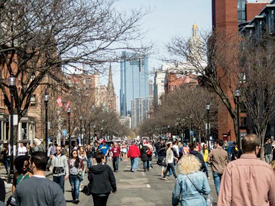 What do you think?

During a “Twitter chat” Wednesday with Mayor Martin J. Walsh, where the mayor answers constituents’ questions on social media, a city official gave an intriguing response to one person’s question about whether Boston would ever limit traffic on certain streets to allow for a pedestrian takeover.

“How about closing streets like Newbury, Union, and Hanover to traffic on certain days in the Summer?” asked Adam Castiglioni, who runs a blog about Boston hospitality.

The city responded by saying the concept was already on their radar…”Stay tuned for [information] later this summer,” the City of Boston Twitter account replied.