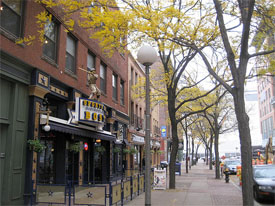 What do you do with an old bank?  Well, on Canal Street in North Station perhaps the best use would be an 80 room hotel.  The current zoning in that area is 100 feet the existing single story building would demolished for new construction.  What’s nearby?  Boston Realty Advisors represent 90 Canal Street which is a 77,976 square foot building with 23,349 square feet available and across the street is new residential construction.

The Boston Business Journal offered an early report on the prospective boutique hotel near North Station:

“Boston’s Bulfinch Triangle, the West End neighborhood across Causeway Street from North Station, could be getting a new hotel…A Woburn-based developer is floating a plan for a boutique hotel with about 80 rooms that would replace the shuttered Bank of America building at 104 Canal St…Somnath Hospitality bought the former bank building in January for $3 million, according to public records. Under the proposal, the one-story, 3,417-square-foot building would be razed to make way for the hotel. Zoning in the neighborhood is limited to 100 feet.”