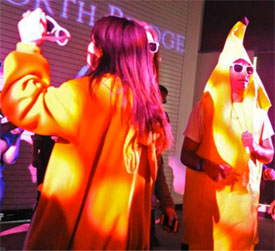 It seems that ice cream Friday for the office doesn’t stand a chance, when pitted against a lunchtime dance party. Will this be a new mainstay within the Innovation district or a passing fad?

The Boston Globe reports, “Lunch Beat Boston style is an amped-up dance hour, where the Seaport’s District Hall is turned into a darkened disco, and techies groove to thumping electronica so loud that networking becomes, by necessity, a wordless bounce to the beat with your neighbor…Lunch Beat — a global franchise that started three years ago in the electronic dance music hub of Stockholm — is a noontime rave intended to break up the work routine with a midday jolt of techno tunes. Organizers in Greater Boston held their fourth such rave Wednesday at District Hall, the newly erected center of the city’s budding Innovation District.”

The full Globe editorial is available to Boston Globe subscribers on its website.