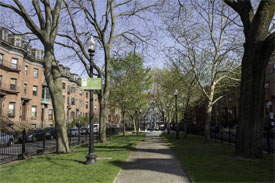 Boston will be 400 years old in 2030 and Mayor Walsh in starting to plan now for the event.  Well, not cake, but working on a city wide master plan.  The last time this was addressed was on this scale was 1965 that launched development like Faneuil Hall, Government Center and highway infrastructure.

“With cranes dotting the skyline and the city in the midst of an unparalleled building boom, Mayor Martin J. Walsh has launched Boston’s first citywide planning effort in a half-century. The two-year initiative, Walsh said, will go beyond a technical assessment of zoning and land use and will encapsulate residents’ aspirations for what the city should become by 2030…Over the next two years, city officials hope to work with residents to tackle contentious topics such as urban density and parking, public transportation, and affordable housing. They anticipate discussion about art and schools and entertainment.”