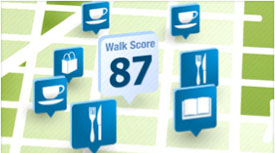 Boston in number 3 behind New York and San Francisco for most walkable cities. Walkscore.com has us with a score of 80 and following quote, “The Athens of America, Boston is a leader in technology and U.S universities including Harvard and MIT.”

Home to MBTA, the world’s first subway system and dubbed “The Walking City” Boston is a pedestrian’s perfect city. Bostonites can catch a Red Sox game at Fenway Park, or visit Boston Common, the oldest public park in the US.