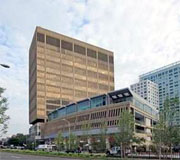 One Broadway in Cambridge MA

Apple is expanding Siri in Cambridge by securing 11,500 RSF at One Broadway.

According to an article on CultofMac.com, “documents filed with local authorities show that the company has leased around 11,500 square feet of office space on the 13th floor of One Broadway, an office tower owned by MIT and located on the outer perimeter of the university’s campus in Cambridge, MA,” in an effort to expand its Siri team.

You can read the entire article the CultofMac website.