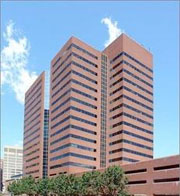 Since Amazon now charges sales tax, it looks like they’re taking on another expense and adding additional office space at 101 Main Street in East Cambridge.  East Cambridge no longer caters to the emerging small business; now landlords are focused on large corporate tenants like Google and Microsoft.

An article on Xconomy.com adds some context around Amazon’s expanding footprint in Cambridge:

“Amazon recently added about 11,000 square feet to its existing offices in Cambridge’s Kendall Square neighborhood, right next to the prime recruiting grounds at MIT…It’s a popular spot for West Coast technology giants to set up shop as they race to hire talented employees, especially outside the highly competitive San Francisco Bay Area. Google and Microsoft  have significant offices in the same area of Cambridge, and Facebook has added an engineering outpost of its own. Apple also previously established a smaller office, with a focus on speech technology.”

Click through if you want to view additional property details on the listing page for 101 Main Street in Kendall Square.