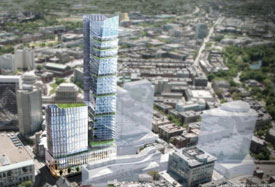 Back Bay could be getting some more height at 1000 Boylston Street from Weiner Ventures.

The parcel is a block away from the 254-foot Hilton Back Bay and 360-foot Sheraton North Tower as well as the 756-foot Four Seasons Hotel and Private Residences under construction. The 52-story Prudential Center tower is two blocks down Boylston. The complex would be on four different parcels, three of which are Mass Pike air rights plots.

If completed, 1000 Boylston will feature 182 apartments and 160 condominiums above a six-story podium composed of retail and parking. Its prominent location near the intersection of Boylston and Massachusetts Avenue is particularly complex due to the limited amount of ground the tower has for foundation.