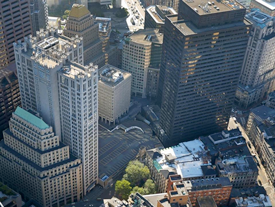 The shuttered city garage on Federal Street was on center stage at the Great Hall at Faneuil Hall, so to speak.  What is in store for our future?

Six teams of developers and architects, eager in their suits, stood by posterboard presentations and 3-D models and explained the tall towers they’d very much like to build on the site of the Winthrop Square Garage in downtown Boston…Looking at the presentations, one could be forgiven for forgetting that these developers are vying to build one of the tallest buildings in Boston. Sure, everyone had a scale model of their full tower, but most focused their energies on the space where the building meets the street, and on the soaring public halls, pocket parks, and black-box theaters they’re promising to enliven it. After all, that’s where most Bostonians would experience these buildings most of the time.

The BRA says it wants to name a developer soon, but expect it to be months, not weeks, before that happens. The authority hasn’t yet opened financial documents attached to the proposals, which detail offers to purchase or lease the site and each team’s wherewithal to build the thing. After that’s done, BRA real estate chief Ed O’Donnell said, the authority is likely to winnow the pack down to a few finalists and invite them in for another round of interviews. While O’Donnell insists he’d like to name a developer while the real estate market is still hot, reading between the lines that sounds more like it will happen in August or September than in July.