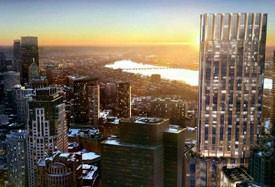 Boston Mayor Marty Walsh is pushing for the Winthrop Square Tower and is offering tighter restrictions on future tower developments as a concession.

Mayor Marty Walsh’s proposal would bar future developments (except Millennium’s) from casting a shadow over the Common, Public Garden and Back Bay’s Copley Square. The plan would also call for new zoning in the Financial District and Downtown Crossing. The shadow change also needs state approval by Gov. Charlie Baker and the state legislature due to the changes it would bring to the Massachusetts’ 1990 shadow law.