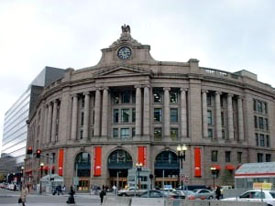 The largest commuter hub North of New York City is South Station, yet the largest abutter is a mail sorting facility.  In 1965, yes 51 years ago, part of the site was sold and the Boston South Postal Annex was created.  A number of things have changed since 1965 and some still need to; the Boston South Postal Annex should be redeveloped to better serve the community.

According to a B&T report, rather than “expanding the search to other Boston neighborhoods, or for that matter, suburban locations, the brokers working for the postal service have doubled down on Southie…Now brokers working for the postal service say they are moving closer to a deal for a site on D Street near the Boston Convention & Exhibition Center, where traditional South Boston meets the Seaport.

You can read more on the USPS’s hunt for space in Southie on Banker&Tradesman.