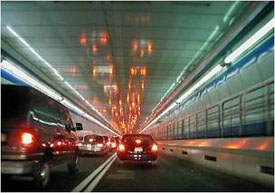 What makes Boston perfect for the business traveler? Well, I for one have spent many hours commuting from airports to the cities they serve. Boston is different; our airport is in our city and just a short cab ride or a couple of stops on the Blue Line. The Callahan Tunnel — a core path to Logan airport — was opened in 1961 and like all infrastructure, needs maintenance. The tunnel is scheduled to close on December 27th and reopen on March 12th.

Details on the tunnel’s modifications were posted on the Boston Business Journal:

The DOT awarded McCourt Construction a $19 million contract in August for the project. During the time the tunnel is shut completely, the project will mainly involve demolishing and rebuilding the roadway and deck through the tunnel. East Boston-bound traffic will be redirected to the Ted Williams, the Tobin Bridge, or Route 16 in Everett. That third option involves plenty of intersections along the way to Route 1A. So DOT will upgrade traffic signal equipment at 20 spots, primarily along Route 16.

The full BBJ article is available on the Bizjournals website

Did you know that the tunnel was named for the son of Turnpike chairman William F. Callahan, who was killed in Italy just days before the end of World War II.