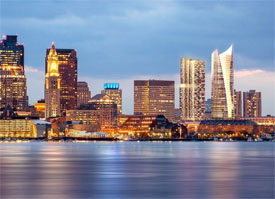 Government Center is schedule to make way to two glass towers would extend to 500 +/- feet tall.  One tower would be dedicated for residential while the second would be for office space.

“The construction will unfold in phases over the next five years or so. And when done, the whole complex — six buildings and 2.3 million square feet — would be one of the biggest developments to come out of Boston’s current building boom. Opening up that section of Congress Street and adding a large public space within the retail plaza will help reconnect some of the most historic pockets of the city,” a Boston Globe article notes.

“We’re going to see just how significant that parcel is. It’s at the intersection of the Bulfinch Triangle, the North End, Beacon Hill, and Government Center,” said George Thrush, an architecture professor at Northeastern University. “That garage has been a real barrier and now it won’t be.”

You can read the full Boston Globe article on its website: Government Center Garage Gets Final Approval.