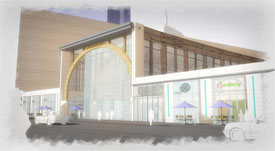 The Back Bay skyline could see yet another change on the horizon.  Plans state that there would be one high rise and at least one mid-rise tower on the site.  The present building was designed by Kallmann McKinnell & Wood and opened in 1987.  That building replaced the older station that opened in 1928 for New Haven Railroad.

The Boston Globe reported on the considered remodeling of Back Bay Station, nothing “the owner of the John Hancock Tower in Boston is negotiating with Governor Deval Patrick’s administration to renovate and manage the MBTA’s Back Bay Station in exchange for the right to build a towering complex of residences, stores, and offices… [it would include] a skyscraper and at least one other building above the rehabilitated station, which would get a new retail arcade, ventilation upgrades, and a glass facade along Dartmouth Street.”