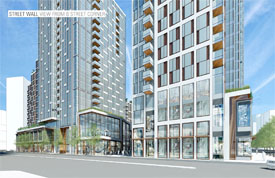 The skyline in the Seaport continue to change with the approval of 3 more towers Boston Civic Design Commission.

According to a recent Boston Globe article, “the Boston Civic Design Commission gave its approval to the plans for three 22-story condo and apartment towers and retail along Seaport Boulevard. It’s the final city approval needed for the $700 million project, said Nick Martin, a spokesman for the Boston Redevelopment Authority…Unlike many developments in the Seaport, which have been criticized for being overly boxy, these buildings are designed with staggered heights and different shapes arrayed around an elevated podium with retail on the 3.5 acre site. It would include about 1,100 condos and apartments,- with the exact mix to be determined by market conditions – and 125,000 square feet of retail space. The buildings will be built on two blocks between Seaport Boulevard and Congress Street, between B Street and East Service Road.”

You can read the full article on the Globe’s website.