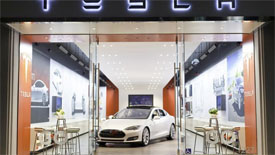 Boylston Street continues its technology leadership role with anchor stores from Apple, Verizon, AT&T, Microsoft to its newest Tesla Motors.  Tesla will be one of the newest addition to the Shops at Prudential in Boston’s Back Bay.  The Prudential complex consists of:

A BBJ article, covering the announcement of a Back Bay Tesla store, notes the following:

“We are excited to have a larger presence in Boston,” said a Tesla spokeswoman in an email, adding the store would host an “opening event” in the next several weeks. She declined to discuss any other other details of the retail store. Tesla already has two stores in Massachusetts, one in Natick and one in Dedham. The company also has a service center in Watertown. A company spokesman recently told the Boston Herald that it has plans to open more stores in Massachusetts over the next two years.