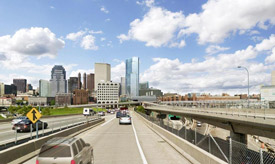 The South Station tower moves closer to reality despite some obstacles. The tower would be built on spec.

The Boston Planning & Development Agency board approved plans for a 51-story office and condominium tower over the busy rail hub…Development firm Hines would build the tower above the rail shed at South Station, with a lobby along Atlantic Avenue. That lobby would fill in the gap between South Station’s main concourse and its bus terminal, and would expand the bus facilities by 50 percent. It would also expand a parking garage, adding 527 spaces.

Above that, Hines would build 1.1 million square feet of office space and condos in what, at 677 feet high, would rank among the city’s tallest buildings. Later phases would add two mid-rise buildings atop the station.