Soccer might be coming to Boston to be closer to the fan base.  The stadium could be just off of 93 within walking distance of the W. Broadway T stop. 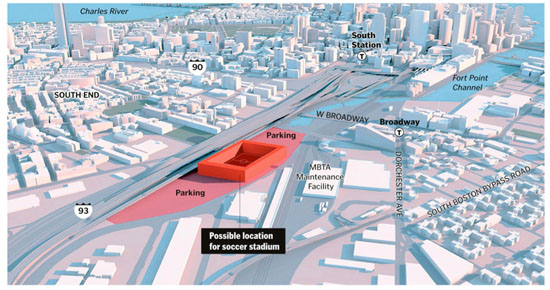 According to The Boston Globe, one site “under consideration is a strip of city-owned land off Interstate 93 on Frontage Road, where Boston has a large yard for towed cars and public works. The South Boston property offers easy access from major highways and is near the MBTA’s Red Line as well as rail lines at nearby South Station. Numerous sources said the Kraft family has been meeting with state and city officials to discuss the stadium and possible locations over the past several months, with the team focusing on Frontage Road.”

The Globe also quotes the Krafts through a spokesman in the article: “We are currently developing concepts for how a soccer stadium for the Revolution can benefit the greater Boston area. Once we have more developed plans, we will comment further.”