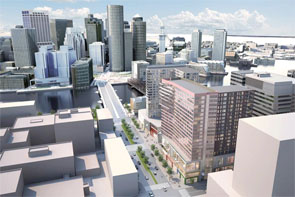 The Boston Seaport, one of the hottest office markets nationally, continues its transformation with plans to build a pair of 22-story towers on Seaport Boulevard.

The Boston Globe posted an article earlier this morning, revealing, “a deal is emerging to build one of the South Boston Waterfront’s largest developments: a pair of 22-story towers on Seaport Boulevard that would include up to 800 apartments and a 300,000-square-foot retail and entertainment complex. The towers would be among the first major buildings at the long-planned Seaport Square project, a 23-acre complex that would eventually replace the district’s sea of parking lots with residences, office buildings, stores, restaurants, and public parks.”