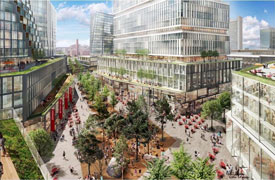 The Seaport is poised to get a library, but let’s wait to see if it materializes in Boston’s booming commercial real estate sector.

[State Representative Nick] Collins, a Democrat who represents South Boston, is among those who have complained that the burgeoning district is being built without enough of the places — like a library — that make a neighborhood feel like home. As WS Development finalized plans to put housing, office buildings, and retail on 12.5 acres of parking lots, Collins pressed the developer to add a library to the project, known as Seaport Square.

But when the Boston Planning & Development Agency approved the developer’s plan Nov. 16, it required two performing arts centers, but no library. That same week, however, Collins inserted a provision into a large state bond bill that would set aside $10 million for “creation and construction of a Boston Public Library branch on the South Boston Waterfront.”