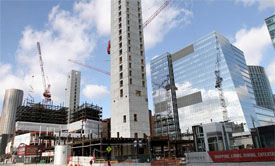 A recent Boston.com article references apartment rentals in the Seaport, but what is expected for Class A and B office rents?  Rents will continue to push Northward, which is due to limited supply in the Seaport submarket.  GE moving to town won’t dramatically move the rent needle up or down, but ancillary service providers will continue to chip away at vacancy.

“If you look at what has happened since 2011, since post crash,” [Ishay Grinberg, president of Rental Beast] said. “Rents [in Seaport] went on average from about $3,100 to $4,100, from 2011 to 2013.” Then when demand wasn’t high enough, they plummeted almost 20 percent in 2014, but went back up in 2015, increasing 15 percent to an average of $3,850 per month.
Currently, rents are high, but so are vacancies—a rarity for the Boston market….More than 12 percent of all rental units in Seaport are currently vacant, according to Grinberg, while in Downtown only a little more than 2 percent are empty. The Greater Boston vacancy rate is 4 percent. And supply is still coming into Seaport, such as One Seaport Square, will include 832 units.