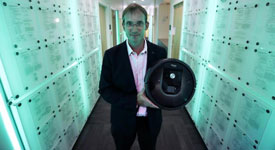 Robots and their creators will soon have a new space in Boston to work their magic and create the next task-oriented machine. MassRobotics, a Boston based nonprofit, has leased about 15,000 on Channel Street in the Seaport and will be opening on February 9th. The facility will house about 30 companies.

According to a Boston Globe editorial, most companies occupying the space “will have fewer than 15 employees, and will have access to office space, laboratory benches, and communal equipment like computer-controlled lathes, 3-D printers, and laser cutters. The equipment will enable companies to produce their own parts and prototypes on-site, Ryden says.” The article also notes that although “the building MassRobotics will occupy is owned by the City of Boston, Ryden said that the money for the space came from corporate sponsors, rather than the city or the state. There’s room for an eventual expansion to another floor, Ryden said, but that would require additional funding. ‘We already know that we’re going to outgrow this initial space.’”

You can read more on the Boston Globe, here.