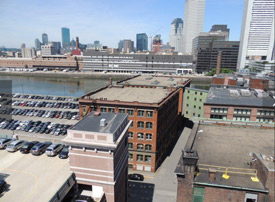 The selection for GE’s site didn’t come without evaluating many other options that ranged from Back Bay to North Station.

Boston officials initially considered 20 development sites, both a mix of private and publicly owned buildings and land parcels, to pitch to GE. And first on the list that Boston officials considered was Fort Point’s “100 Acres Area” — a master-planned effort to transform the existing surface parking lots around the Procter & Gamble/Gillette plant, and GE’s ultimate final choice for its permanent headquarters locations.

The sites were eventually narrowed to seven final options, five of which were located in the Seaport District, in a Dec. 1 pitch book to GE (NYSE: GE) executives. GE’s ultimate choice for a headquarters — a 2.5-acre plot on the Fort Point Channel owned by Procter & Gamble Co. — was not highlighted in the final pitch book.