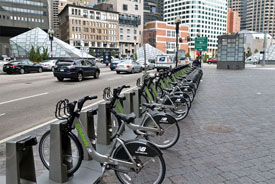 So as you consider where you would like to locate your new office what often comes up is area amenities.  One such amenities is Bike-Share, and if you plan on being near one, expect to pay a premium in your office rents.

“Boston has the highest percentage of residents who walk to work of any major U.S. city at 15.1 percent, according to the U.S. Census Bureau’s American Community Survey. Bike commuting is a small but rapidly growing niche, rising from 1 percent in the 2000 census to 1.7 percent in the community survey, which spanned the years from 2008 to 2012….Hubway has a variety of payment plans designed to appeal to everyone from tourists to everyday commuters, ranging from $85 for an annual membership to a $6 pass for 24-hour access. Ridership has topped 500,000 trips since this year’s program began April 2, with a fleet of 1,300 bikes at 139 stations in Boston, Brookline, Cambridge and Somerville, according to Alta spokeswoman Emily Stapleton.”