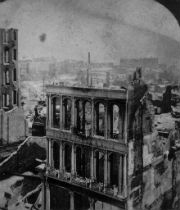 The great Boston Fire started on November 9th in 1872 that started on the corner of Kingston and Summer Streets which is now the heart of Downtown Crossing (DTX).

The historic significance of the fire’s aftermath of the city’s commercial development is noted in The Daily Times:

On this day in 1872, a fire in Boston destroyed hundreds of buildings and kills 14 people. In the aftermath, the city established an entirely new system of firefighting and prevention. The fire also led to the creation of Boston’s financial district…The business community saw the burned area as an opportunity to expand its presence downtown. The city’s financial district was established where the fire had hit hardest and Boston soon became a key business center of the late 19th-century United States.